17 May Botox vs. Dysport: Which wrinkle treatment is best for you?

Rounding the bend in the second half of their 30s, most women will recognize fine lines becoming more prominent and start considering Botox or Dysport. And then one day, you look in the mirror under some different lights, and there you see it—the dreaded “eleven.” The faint lines around your eyes have become crow’s feet. Now what? There are no face creams or serums that can erase the years of your face, only make it a little bit smoother and more hydrated. Which helps, but minimally.

Luckily, we live in an age where you can do something about it. For those who want to turn the clock back a little, it’s nice to know that there are options. Between the vast range of cosmetic treatments without plastic surgery needed available, two of the best ones are Botox and Dysport.

Let’s talk about what both of those treatments can do for you. This blog will explain what Botox and Dysport are and the main differences between the two. You will also find out which option would work best for you and where to seek professionals who will give it their all to make you look youthful and refreshed.

To know which one is best for the results you wish to achieve, We will explain what each one does and how they differ. 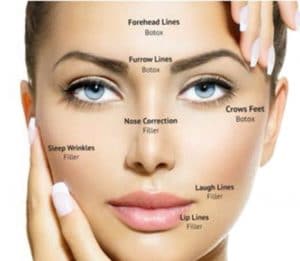 Botox is the most well-known and popular wrinkle treatment, widely used globally in treating forehead lines, fine lines, and “crow’s feet” around the eyes. The globally used injectable was FDA approved in 2002; it has proven its effectiveness for millions around the world. Botox, also known as botulinum toxin type A, is an injectable neurotoxin treatment used in a wide range of cosmetic procedures. Most commonly, it is used to treat fine lines and wrinkles by blocking nerve signals to targeted muscles.

The treated area gets temporarily paralyzed, so the muscles cannot contract as hard as before. While that is the case, wrinkles relax and soften. Botox is generally used to treat the glabella, area, crow’s feet, and necklines. It is entirely safe and non-invasive if performed by professionals who know their craft.

Besides ironing wrinkles, Botox also helps treat some medical conditions, such as TMJ disorders.  Botox is derived from the bacterium Clostridium botulinum and has been proven totally safe in many clinical studies.  Treatment is also very quick and almost painless. Side effects happen very rarely, although there are a couple of restrictions you have to be aware of post-treatment.

If you opt for Botox, you might notice its effects within two to three days and total effects in approximately two weeks. These results typically last from three to six months, so follow-up treatments are recommended if you want to keep looking fresh.

Like Botox, Dysport is also an injectable wrinkle treatment. But, this one is specifically designed to help smooth your glabellar lines and has shown superb results in targeting those dreaded forehead furrows. Those unwanted wrinkles are caused by muscle contractions in the area, which cause the vertical lines to appear. In the past twelve years, it’s been used worldwide. Dysport has been proven to be an excellent solution to that specific problem.

Dysport was initially designed by a company called Galderma, with the generic name of abobotulinumtoxina. It is made from the same bacterium as Botox, Clostridium botulinum. However, Dysport is more diluted and contains less protein than Botox. It was FDA approved in 2009, and it’s shown excellent results on the market since then.

Both of these wrinkle treatments are types of Botulinum injections and work in a somewhat similar way. Generally, they are both used to reduce stubborn wrinkles such as frown lines, forehead lines, and crow’s feet. They are both fantastic products when used by professionals, but which one would work better for you?

Here’s the breakdown—the main difference between the two lies in the effectiveness of proteins in each of them. As far as Botox is concerned, it has been approved for best treating crow’s feet, forehead lines, and glabellar lines. Dysport, on the other hand, has only been approved for glabellar lines treatment. The injections are meant for people with moderate to severe glabellar lines only because they go a bit deeper than Botox and cover a more extensive area.

Dysport is a better fit for addressing the wrinkles around the eyes. At the same time, Botox is more preferable using around the mouth since Dysport might extend further and cause some pretty undesirable effects.

How long do Botox and Dysport last?

Depending on the patient, both of the wrinkle treatments can last somewhere between three to six months. The critical thing to know is that the molecules in Dysport are smaller than the ones in Botox, so the results of Dysport are seen more quickly. To be exact, you will see Dysport results within three to five days post-treatment. On the other hand, it will take seven to fourteen days to witness the full effect of Botox injections.

Even though Dysport has a quicker onset, it’s important to remember that Dysport diffuses over a broader area than Botox. However, both of the wrinkle treatments last the same length of time.

The most significant difference: Amount of injections needed

The amount of product needed for treatment is probably the most significant difference between Botox and Dysport. Since Dysport is more diluted, you will have to receive higher dosage units if you choose it over Botox. Basically, you will require more units of Dysport to achieve the same results Botox would give you.

There is also a difference in the reaction. As already stated, Dysport spreads to a broader area, while Botox pretty much sticks to the injected area. So, if you want to treat a wider area, such as the forehead, Dysport might spread out a bit more. On the other hand, Botox is preferred for treating smaller areas, such as the wrinkles surrounding your eyes.

Are you a candidate for Botox or Dysport?

The fact is, whatever your age or skin type is, you’re a good candidate for both Botox and Dysport. People wanting to maintain a youthful appearance typically start with wrinkle treatments in the ages of 35 to 65. More and more people under the age of 30 started with the various non-surgical “rejuvenation” treatments.

It all comes down to finding a professional who has a superb knowledge of the face muscle structure. One of the most important steps is finding the person who will look out for you to know what best suits you. The thing is, for some areas of your face, Botox might be better, while on others, Dysport would do the best job.

Trust in your doctor is vital. If you’re interested in seeing what a true professional in the craft can do for you, visit VIP Medical clinic in Jackson, TN. VIP deals with weight loss, anti-aging, and immediate care with a highly trained staff using the most advanced methods.

Contact VIP Medical at 731-300-4847 for a detailed talk and diagnosis, and they will find out the best solution for you.